The Moon and Venus and other goodies


It's a feeling I get many times when, at times when some of the major planets in our solar system are visible at a given time, I appreciate the enormous distances of the planets from Earth. In the two images below, the Moon and Venus show the two "in conjunction (July 15, 2018)". This is purely a local, and temporary perspective. The two pictures were taken well over an hour apart. You can clearly see the Moon's motion in its orbit - it moves about a half a degree per hour (0.55 degree).  From Earth, the Moon is about 1/2 (0.5) degree in apparent diameter, so it moves it's own diameter in an hour. Since the Moon has an actual diameter of very close to 3,500 kilometers, it travels at 3500 km/hour. 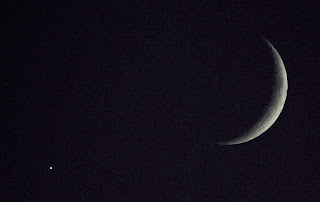 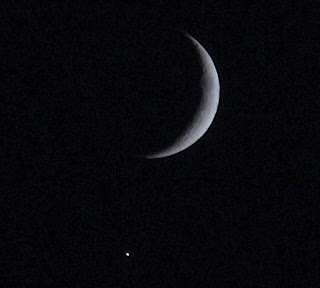 Moon and Venus after well over an hour later
Venus (almost Earth-sized) was about 370 times farther away than the Moon at the time. It took Venus's light about eight minutes to reach Earth, from the Moon 1.3 seconds.
Right now, late middle of July, in addition to the Moon and Venus, there are a few showpieces in the evening sky: Jupiter, Saturn, and Mars. While Jupiter and Saturn are always of interest to the general public, Mars is usually quite small, and few details are seen on its surface. At this particular time, though, Mars is approaching a close position to Earth, and more details would normally be visible. As fate would have it, a planet-wide dust storm is raging on that planet, which is obscuring much of its surface. That storm is bad enough to affect the still working rover vehicles (Curiosity and Odyssey) which have been put on its surface. anything that uses solar power has been put into "low-power" mode and is not sending back any data. The concern is that those with back-up batteries will run out of electrical power if the storm lasts much longer. Here's an image from the Jet Propulsion Laboratory in Pasadena: 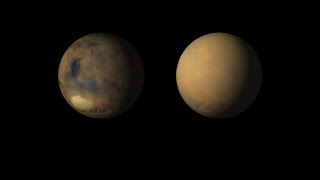 On the left, is Mars as it normally appears in a large telescope, on the right is the storm-obscured equivalent. Let's hope that it clears up soon.
at July 20, 2018

I'm an old friend of Derek from the Apple days.

Please check out this site and tell me your thoughts: tychos.info