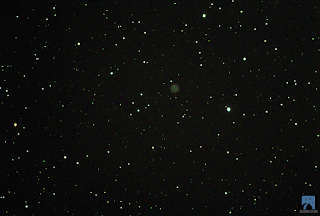 (remotely photographed through a Slooh.com telescope) 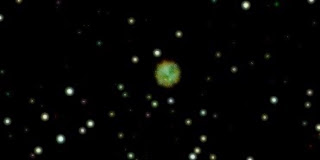 I've been away for the better part of the last two months, and, being back home, decided to pursue my astronomical activities by using one of Slooh.com's remotely-controlled telescopes.

About 2030 light years distant, in the constellation Ursa Major, you can find the Owl Nebula (M97). In 1781, the French astronomer Pierre Méchain discovered this planetary nebula. At a time when there no photographic technology, some observers drew the nebula image resembling an owl's head. That appears to be the source of the name. Here is a description found in Wikipedia:

The nebula is approximately 8,000 years old. It is approximately circular in cross-section with a little visible internal structure. It was formed from the outflow of material from the stellar wind of the central star as it evolved along the asymptotic giant branch. The nebula is arranged in three concentric shells, with the outermost shell being about 20–30% larger than the inner shell. The owl-like appearance of the nebula is the result of an inner shell that is not circularly symmetric, but instead forms a barrel-like structure aligned at an angle of 45° to the line of sight.
The nebula holds about 0.13 solar masses of matter, including hydrogen, helium, nitrogen, oxygen, and sulfur; all with a density of less than 100 particles per cubic centimeter. Its outer radius is around 0.91 ly (0.28 pc) and it is expanding with velocities in the range of 27–39 km/s into the surrounding interstellar medium.

The 14th magnitude central star has since reached the turning point of its evolution where it condenses to form a white dwarf. It has 55–60% of the Sun's mass, 41–148 times the brightness of the Sun, and an effective temperature of 123,000 K. The star has been successfully resolved by the Spitzer Space Telescope as a point source that does not show the infrared excess characteristic of a circumstellar disk.