Not very far in the night sky from the Andromeda Galaxy (our sister galaxy) you can find M33. It is about 2.9 million light years distant from our galaxy, but not often a target at public astronomy nights (i.e. SFU's Starry Nights). Under the best observing conditions - no light pollution and a really dark sky - this galaxy, the third largest in our local group, is visible to keen, dark adapted eyes without optical help. A pair of binoculars is a great help because M33 is a diffuse object - the amount of light it produces is distributed over an area about four times the apparent area of the Moon in the sky (see pages 317 and 333 in the Royal Astronomical Society's Observers' Handbook for the year 2020). You can understand that the sky conditions required for its visibility are unlikely to be met in a light polluted city night sky. Below is a photo I took via remote access to a Slooh.com telescope

Some on-line star applications call it the Pinwheel Galaxy. That is not generally accepted, because the name is normally given to M101, a galaxy in the constellation of the "Big Dipper", about 21 million light years away.

M33 seems to be a satellite galaxy of the Andromeda galaxy (M31). It may perhaps be on a rebound into that galaxy. The velocities, proximity, and indications of gravitational interactions make that a possibility. A very detailed entry regarding M33 and M31 and the interactions between them can be found in Wikipedia by searching for the "Triangulum Galaxy".

Here's an excerpt from Wikipedia regarding the relationships between these two galaxies:

Relationship with the Andromeda Galaxy 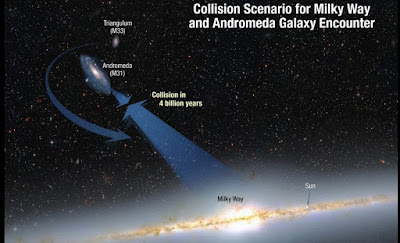 Triangulum on the collision paths of Milky Way and the Andromeda Galaxy. M33 appears to be linked to M31 by several streams of neutral hydrogen and stars, which suggests that a past interaction between these two galaxies took place from 2 to 8 billion years ago, and a more violent encounter will occur 2.5 billion years in the future.

The fate of M33 was sketchy in 2009 beyond seeming to be linked to its larger neighbor M31. Suggested scenarios include being torn apart and absorbed by the greater companion, fuelling the latter with hydrogen to form new stars; eventually exhausting all of its gas, and thus the ability to form new stars; or participating in the collision between the Milky Way and M31, likely ending up orbiting the merger product and fusing with it much later. Two other possibilities are a collision with the Milky Way before the Andromeda Galaxy arrives or an ejection out of the Local Group. Astrometric data from Gaia appears to rule out the possibility that M33 and M31 are in orbit. If correct, M33 is on its first infall proper into the Andromeda Galaxy (M31).
Here is an an excerpt from a (highly recommended) Stellarium Mobile planetarium map of the sky showing the relative positions of the Triangulum and Andromeda galaxies. 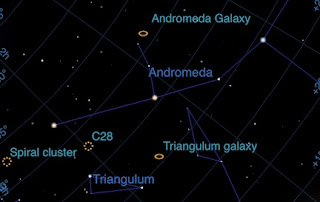 Stellarium Mobile app star map.
The above excerpt shows that several different scientific opinions are stated about M33. It's obviously an object about which a number of uncertainties exit. And yet, it is less likely to be shown as an object of interest at public astronomy nights (placed best in the sky in the autumn of the year). The reason is likely because public astronomy nights are usually set in or near a city, with light pollution making M33 hard to see. Usually, the planets, the Moon, and even the Andromeda Galaxy are the showpieces.