It's been raining here for all of January, one day of no rain. February was not much better. From my astronomical point of view, it was the pits. I haven't taken part in one of SFU's Starry Night events since well before Christmas; Since October, most of the time the event had to be cancelled, mostly because of bad weather.

Every now-and-then, there was a break in the clouds, allowing for a short glimpse of the evening and night sky. A few nights ago, the Moon and Venus appeared very close to each other. The picture shows a similar situation exactly 4 years ago today. At that time, Mars was also near the Moon, but not this time. I looked at the recent event a couple of nights ago, through some holes in the clouds, but before I could get my camera ready, the Moon and Venus were covered up again. Let me emphasize that the apparent closeness of these two planets to the Moon is strictly a perspective effect, caused by the particular position of our Earth in its orbit around the Sun. The actual distances are in the millions of kilometres.

Another way to do some "armchair" astronomy is to take some pictures of the sky, preferably as seen from other latitudes. To this end I use one of the remote-controlled telescopes at Slooh.com, with locations on the Canary Islands and Chile. Here's a black-and-white image of the Tarantula Nebula. 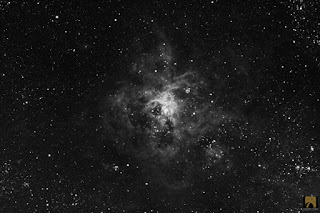 I quote an excerpt from Wikipedia:

"The Tarantula Nebula has an apparent magnitude of 8. Considering its distance of about 49 kiloparsec (160,000 light-years), this is an extremely luminous non-stellar object. Its luminosity is so great that if it were as close to Earth as the Orion Nebula, the Tarantula Nebula would cast visible shadows. In fact it is the most active starburst region known in the Local Group of galaxies. It is also one of the largest H II regions in the Local Group with an estimated diameter around 200 to 570 pc, and also because of its very large size, it is sometimes described as the largest although other H II regions such as NGC 604 which is in the Triangulum Galaxy could be larger. "

Let the weather gods do their thing - if you have a roof over your head, and a safe place to live, you can evade them anyway.