Lately, I've had the bad luck to try for some images on the Slooh.com telescopes on the Canary Islands. These remote-controlled telescopes have been inactive for the last few times I've tried to capture images, due to unsuitable weather. A couple of months ago, I used one of the remote-controlled telescopes on December 20, 2017 to get an image of both M52 and the Bubble Nebula (both located in the Cassiopeia constellation). Here is a picture: 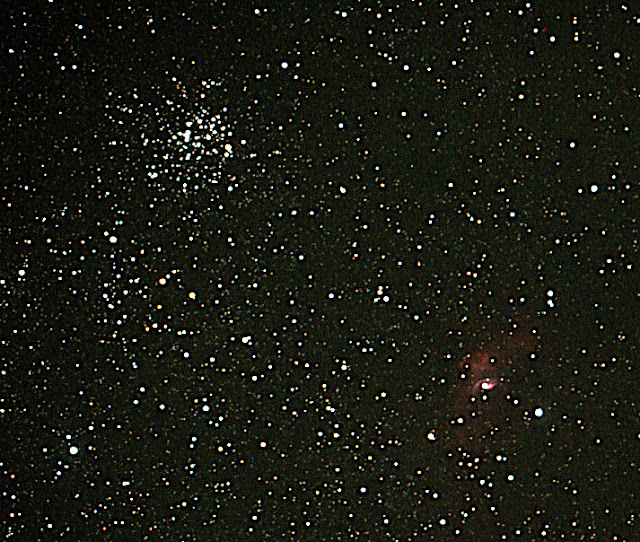 Classified as an open star cluster, Messier 52 (NGC 7654) is located in the Cassiopeia constellation. It was discovered by  Charles Messier in 1774. M52 can be seen with binoculars. Distance estimates range between 3,000 and 7,000 light years. This uncertainty is caused by interstellar absorption of light. There are an estimated 190 stars in the cluster. The poorly known distance, and the numerous foreground stars make a determination of a more accurate number of cluster members difficult to determine.


The Bubble Nebula (NGC 6735), is a Hydrogen emission nebula also located in the constellation Cassiopeia (you'll need a minimum 10" telescope and a dark sky to see it faintly). The stellar wind from a massive hot, young central star is the cause of the "bubble”. The nebulous cloud itself is illuminated by the hot central star whose high-energy light is causes the cloud to glow. William Herschel discovered the cloud in 1787. Its distance is also uncertain, interstellar light absorption affects estimated distance, which is listed as 7,100 - 11,000 light years. The star causing the bubble is thought to have a mass of about 44 times the mass of our Sun.