Something which is unfortunately not seen from our latitude is one of the oldest and likely the largest concentrated accumulation of stars in our galaxy. It is a globular cluster, of which there are about 200 or so associated with "us". These clusters are very old, they have been around for about 10 to 12 billion years. Our own universe is calculated to be about 13.7 billion years old, so they have existed for most of that time.

This particular one is best seen from the night sky close to, and at latitudes below Earth's equator. It can be seen by the naked eye as a fuzzy star in the constellation Centaurus, and is accordingly named like a star: "Omega Centauri" (a mix of a Greek letter and Latin constellation name). It turns into an amazing view when seen through a pair of reasonably large binoculars or wide-field telescopes. As a photographic object, it truly "shines", much like a box of diamonds.

Since it is unobservable from our area, and since the current weather prevents any outdoor observing of the sky, I decided to resort to "old trusty", and acquired an image of Omega Centauri via a remote-controlled Slooh.com telescope, located in Chile. This is a favorite object for many astrophotographers and has been recorded thousands of times. Robert Conrad, the Observing Director in our Vancouver centre of the RASC posted his excellent photo in NOVA (March/April edition), our bimonthly news letter.

Here is my wide-field image of Omega, cropped to centre it in the frame: 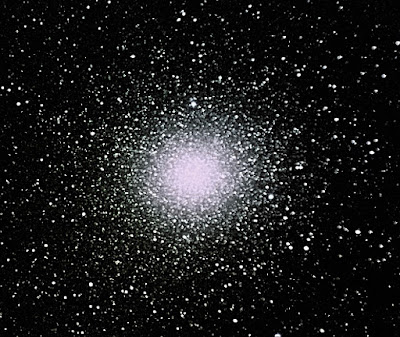 This globular cluster contains about four million stars. That is about 10 times the number contained in M13, the most impressive globular in our sky (but not visible with my unaided eye, at least). Some estimates say that the average distance between the stars in Omega Centauri is less than one light year. Can you image the blazing night sky you would see on a planet that orbits one of those stars?

The orbits of planets around any of these stars would likely be perturbed by the other close near-by stars to make them unstable, with local climate subject to large swings from hot to cold. That would make an evolution of life as we know it unlikely. Well, it's nice to speculate.