On January 31, 2017 morning, I got up to have a look at, and take some pictures of the total lunar eclipse which has been hyped as the "blue, blood, eclipsed Super Moon". As the weather gods would have it, there were variably transparent clouds everywhere. I took a total of 356 pictures, many of which were of poor quality because of this. To control the camera, which was attached to a tracking mount, I used my 27" iMac, loaded the Canon EOS control program, and connected the camera to one of the computers USB ports. The program allows remote control of various camera functions, including exposure and ISO ratings.

I set up the Canon 60Da camera at the window inside my office. This window is on the west side of our house and fortuitously looks out on that part of the sky in which the eclipse took place. An old Pentax 200mm and a 2x Barlow lens (both Pentax threads) resulted in an effective 400mm telephoto lens; this combination was attached to the 60Da by means of Pentax-thread-to-Canon adapter. In order to get reasonable quality images, I opened the office window, and took out the mosquito screen. That meant that the office got really cold; when daylight arrived there was frost on the roof of houses and frosty cars. To make this 5-hour photo session more comfortable, I set up my MacBook Pro laptop, using VNC, to communicate with the iMac in the office over my internal computer network. VNC was set to show and control the iMac screen in the office. I set up the MacBook in the kitchen to keep warm and kept the office door closed.

Here is a picture taken near the beginning of the eclipse: 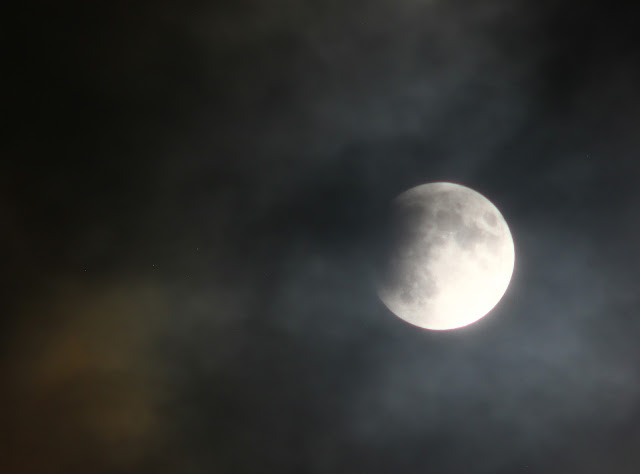 The cloud situation was variable throughout the whole eclipse. This meant that I had to experiment continuously with exposure times and ISO settings (the reason why I took so many images). But whenever I hit the correct exposure, I could suppress the clouds and bring out the actual image of the eclipsed moon. This image was taken under those conditions: 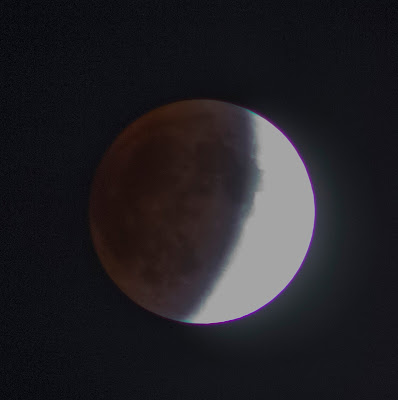 The partial phase - the bright part is highly overexposed in order to bring out the colour inside the Earth's shadow. This colour of the shaded part is caused by the Earth's atmosphere refracting the Sun's light into the shaded part. If you were on that (shaded) part of the Moon, the Sun would be covered by the Earth, but Earth would be surrounded by a red "sunset" ring.

This is an image of the Moon at mid-eclipse through a fortuitous, short "clear" hole in the clouds: 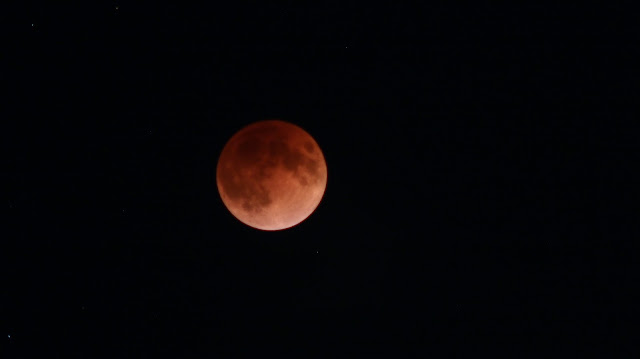 The Moon at maximum eclipse.  It is illuminated by the Earth's atmosphere's refracted sunlight light only.

The cloud situation got worse after the eclipse total phase was finished. The Moon was also much lower in the west. Here's another through a "cloudhole" shot. It was the last clear one: 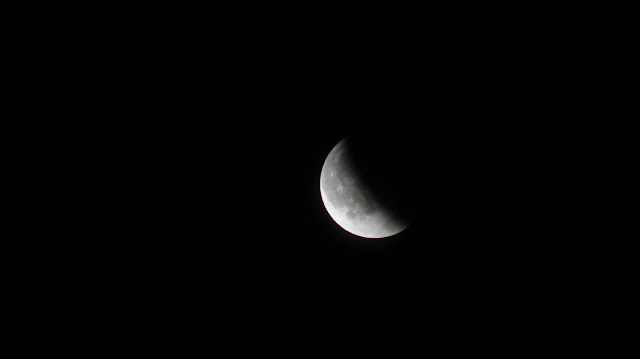 The final image below. A thick bank of clouds rolled in and covered the Moon completely. The variable clouds earlier fortunately occurred in the right time frame to see most of the eclipse. 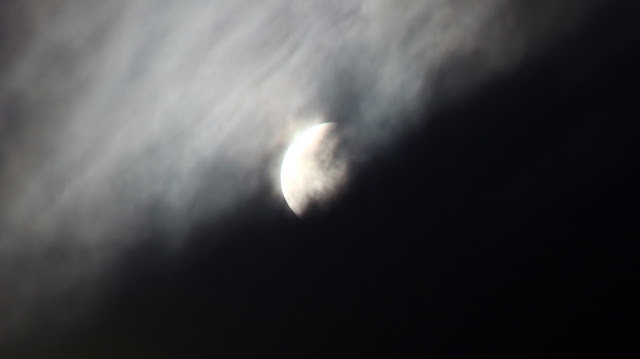