This is why the Hubble Space Telescope (HST) exists.

Astronomers are constantly looking to get finer detail about the universe, in order to better understand  it's evolution. We are also trying to find "life as we know it" elsewhere, both on  planets and moons in our own solar system, and other planetary (exoplanet) systems. Traces which could be attributed to "life" are very hard to detect, and this effort requires all the details we can possibly gather.

Optical and radio telescopes, underground particle, cosmic radiation, and gravitational wave detectors, and other ingenious devices constantly collect, and highly trained people analyze these data to come to some more detailed conclusions about the answers to these endeavours.

One of the major steps in acquiring more detailed information occurred when the Hubble Space telescope started collecting data in 1990. So far, it has sent back more than 1.3 million images, according to NASA. I don't think that any telescope on Earth has done so.

Below is an image I acquired via the half-meter remote-controlled slooh.com telescope on the Canary Islands, and also downloaded a picture of the same globular cluster from the Hubble Space Telescope site.

The slooh.com telescope is of a size which many amateur astronomers also have in their own, private observatories. The HST is a larger telescope which orbits Earth, its mirror is 2.4 meters across. The difference in the details is obvious. The slooh.com telescope would show more detail if it were placed in orbit as well but not nearly as much, because of its smaller size. The reason for space-based telescopes is that this does away with all the interference caused by the Earth's atmosphere and man-made light and other pollution.

There are now other types of telescopes in space, most of which are dedicated to collecting data at wavelengths which are blocked from the surface of the Earth (ultraviolet, x-rays, deep infrared, certain radio frequencies, etc.).

All of this so that more details about the universe can be obtained. 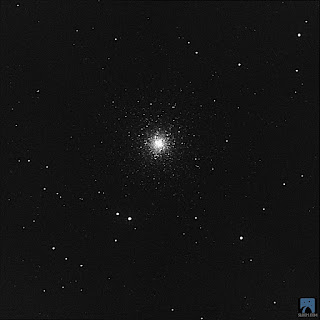 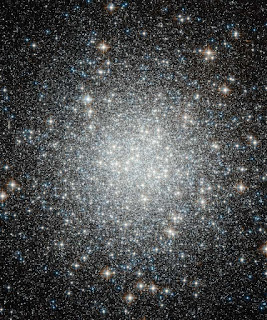 M 53 as seen by the Hubble space telescope, also remote-controlled