To show today's partial solar eclipse (it was not total here) to the public, several of us - members of the Vancouver Centre of the Royal Astronomical Society of Canada (RASC) - set up solar and "white light" filtered telescopes at Telus Science World here in Vancouver. We also gave out hand-held eclipse viewers - we had a limited number, and have none left now.

The eclipse had been advertised extensively world-wide. Telus Science World (and we) anticipated a large crowd, and that certainly was the case. People queued up more than hour before the beginning of the eclipse. The line-up at each of our telescopes was in the hundreds all through the eclipse; someone mentioned that a total of about ten thousand people were in attendance inside Science World and at our telescopes. It was a grand occasion. We have had similar reactions at other events (though not the huge crowds of today). I think it shows that, when it comes to finding things out about what goes on in space, people have an innate interest.

At the time near maximum of the partial eclipse, when the sun was only a crescent reminscent of a young or old Moon, the sunlight turned into an unusual bluish/gray colour and was noticeably fainter. A drop in temperature was also felt by most people. It is odd to see faint sunlight under an absolutely clear sky. It was not like sunset or sunrise - those are commonly red.

This was a very successful event; perhaps we have steered a few young people in the crowds to study and get involved with working in astronomy, and/or related sciences. There is really no boundary between any of the sciences; STEM technologies underly most of them, particularly astronomy and space travel.

Why don't we order up another eclipse soon, we all had a great and fun time.
at August 21, 2017 1 comment: Links to this post

As is a tradition by now, our local centre of the Royal Astronomical Society of Canada helps out at Aldergrove Park near Abbotsford when the Perseid meteor shower peaks annually on August 12. The park administration sets up a tent for us, and reserves some space nearby for us to set up telescopes. Some of our members, and sometimes invited speakers, give several talks regarding astronomical events (past, present, and future). It's a rain-or-shine occasion. If it rains, telescopes are not set up outside, but may serve as exhibits inside the tent.

The Aldergrove Park administration promotes this event. This is the only time in the year at which overnight camping is allowed in the park. Over a thousand people usually attend.

Well, as the weather gods would have it, it turned cloudy just as the evening approached, and started raining towards 11pm. After the eleven days of wildfire smoke, which covered our area during all the preceding, sunny days, and which was finally cleared out by wind from the south-west, this was a disappointment. None-the-less, we are told by the park administration that about 1500 people showed up. During the evening, several hundred of them came to visit our telescopes and tent.

Since we had hoped for some break in the clouds, we set up about half a dozen telescopes early in the evening. Well, there were no breaks, so we ended up looking at the details of distant trees, and also explained to a number of curious campers how different types of telescopes work, and why they are a primary tool for the exploration of the universe. We packed up our telescopes just before the rain started; the talks in the tent continued. Our activities ended just before midnight; had it been clear, we would have stayed all night for the public to have a look at interesting astronomical objects - the Perseid meteors especially, of course. Well, we hope that next year's Perseid meteor date will have a clear night sky.

After the lengthy period of enforced astronomical inactivity, due to the smoke, to satisfy my wanting to do something about it, and before the event at Aldergrove Park started, I had set up a session to automatically take a picture of Fireworks Galaxy, in which a new supernova recently appeared. This galaxy is the home of ten recent supernovae in the last century; there may have been others of which we are unaware before then. This is an unusual frequency of such events in any given galaxy.

The remotely controlled Slooh.com telescope on which I reserved time to take the image is one of several located on the Canary Islands. These telescopes are dedicated to the use of the astronomy community world-wide. Here is a description in Wikipedia:
https://en.wikipedia.org/wiki/Slooh

I retrieved the Fireworks Galaxy image from Slooh.com this morning and did a bit of processing on it with Photoshop and Pixelmator. Here is the original: 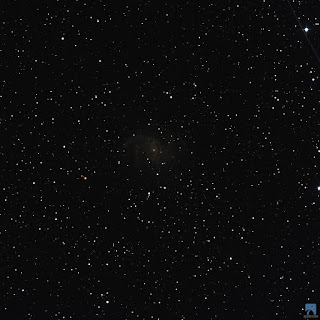 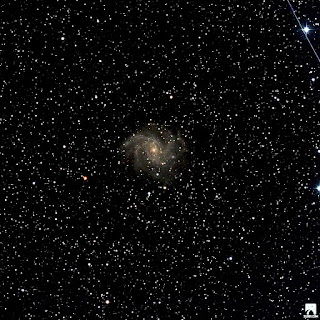 Processed with Photoshop and Pixelmator 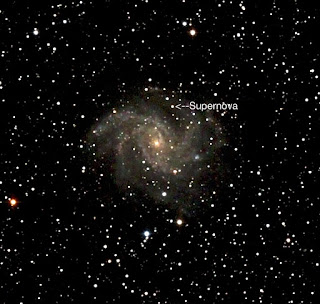 As usual, click on each image to see a magnified version.


Patrick Wiggins, in Utah, discovered this supernova on May 14, 2017. Some type of stars go "supernova" at the end of their lives, when they have used up most of their internal "fuel". A good description of supernovae is found here:
https://en.wikipedia.org/wiki/Supernova

Even though we did not see the Perseids,  I at least got something astronomical out of yesterday.