The nice, warm weather we're having at this time inspired me to take another picture from my very limited view of the sky here at our house. We're located close to Metrotown (lots of light pollution) and our horizon is blocked by high-rise buildings and close-by trees. 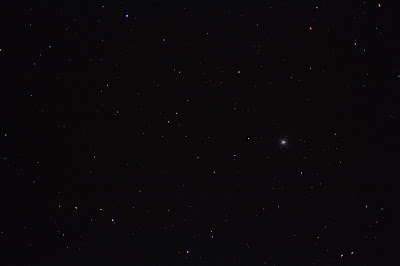 The original image of M13 - the fuzzy "star" at the middle right. 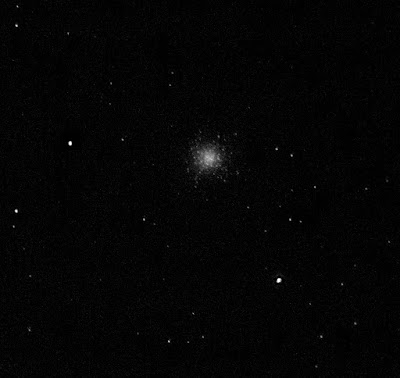 The cropped and enhanced image of M13


The original fainter image at the top, showing a little fuzzy patch, is a picture of the globular cluster M 13 in the constellation of Hercules. Exposure was 30 seconds, ASA 800. This "source image" was taken with a 200 mm lens coupled to a 2x Barlow lens, making the combination equal to a 400 mm lens. The effective f-ratio was f 8.

The close-up is an enhanced image of M 13. You can see that the source image contains a lot of hidden detail. The camera used is a Canon 60Da, the source image is in "Raw" format, which preserves much of the detail captured in the image. The detail can be extracted with appropriate graphics software (I used Pixelmator and Preview for this purpose).

We call our galaxy the "Milky Way" because we're inside it and it appears to us as a "stripe" of stars in the sky so numerous and faint that they melt together to look like "spilled milk". The globular clusters surround our otherwise "pancake-shaped" galaxy in a kind of sphere centered on the core of our galaxy. Other galaxies also have globular clusters. Globular clusters are considered to contain some of the oldest stars in our galaxy. There are estimated to be somewhere between hundred thousand and a million or so stars in each globular cluster. You can see a detailed picture in my previous post regarding M53, another "local" globular cluster (https://penmachinedad.blogspot.ca/2017/07/this-is-why-hubble-space-telescope-hst.html).

My very modest photographic effort gives you a bit of an idea about all this. It's amazing what "every-day" digital cameras can do.