This month has been somewhat unusual for our area so far this year. The snow that started early in December has hung around until just a couple of days ago; there are still a few traces left. Yesterday and today have finally produced clear days. Last night a "cool" assembly of two planets and the Moon was visible in the evening sky (figuratively, and literally - temperature was near zero C at our place), and I took this picture: 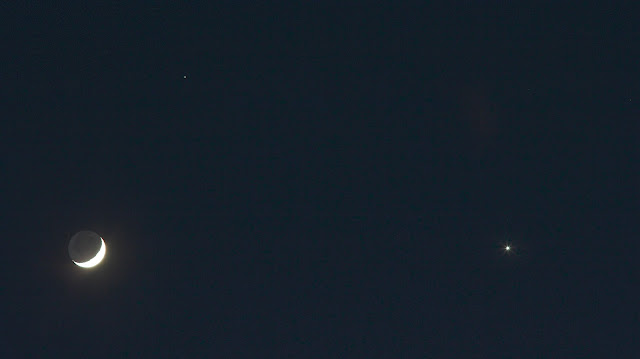 Moon, Mars (above the Moon), and Venus - click on the picture to see a larger image.

Earth passed Mars some months ago, so Mars is trailing, and will soon be on the other side of the Sun from the Earth's point of view, and Venus is moving faster than Earth towards its upcoming pass between the Earth and the Sun.