A fragment from the solar system. 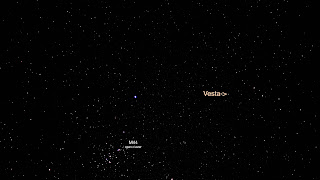 A couple of days ago (May 18) I set up my Canon 60Da camera to take a picture of one of the asteroids which orbit in the area between Mars and Jupiter. This is one of the first asteroids discovered (Vesta - by Heinrich Olbers on March 29, 1807). It is the first asteroid visited by the Dawn space probe and is around 500 km in diameter. You can find some details in Wikipedia, Space.com, and other websites.

I set the camera up on our back porch. The lens used was a 135mm Bushnell, which has an old Pentax mount. I have an adapter for the Canon digital camera, which makes the use of my old film camera lenses possible. The setting was at f2.8, ISO 800, exposure time 8 seconds, on an iOptron star tracking mount.

We live in a highly light-polluted area (near Metrotown) so some processing of the image was necessary. None-the-less, it's quite amazing what a digital camera can do under such poor conditions. Click on the top picture to enlarge it.

Asteroids are thought to be remnants of either an unformed planet or one that was broken up by some major collision during the planet-forming phase of our solar system. There are many thousands of such fragments. Some of them (not Vesta) occasionally impact Earth, with major consequences for life (it's happened before). Vesta is one of the largest. It looks tiny in the picture, because it was about 390,000,000 km distant from Earth at the time.

Here's a picture of Vesta taken by NASA's Dawn spacecraft: 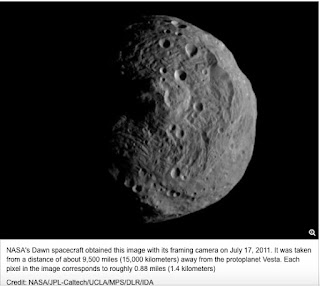