On March 11, at late dusk, I happened to walk out onto our back porch, and, as is usual for anyone into astronomy, I looked up at the sky. In a gap between a neighbour's house and a bush across the laneway separating us, I spotted a fairly bright object. It was not so bright as Venus would be, but about the brightness of Jupiter. Waiting for a minute or so to make sure it wasn't some distant airplane approaching our international airport, I decided that this object was likely the planet Mercury. Knowing that Mercury was near the most favourable (for our latitude) elevation this year, I quickly checked the position using one of my computer programs and grabbed my 60Da camera, went back outside, aimed, and took a picture. The camera was set on manual, unchanged since I last used it for the lunar eclipse described in my January 31 post.

The screen showed only Mercury and a trace of street light reflection on the gutter of the above-mentioned house, otherwise, things were completely black. In other words, the image was severely underexposed. So I attempted another shot with a more appropriate setting, but nothing happened. Another one, again nothing. I finally realized that the the battery indicator showed a completely discharged battery. I went inside to swap in my spare, and making sure the camera was operating normally again, then went back outside, only to find the Mercury had sunk out of sight. So the underexposed image was the only one available.

With the help of the Preview program in my laptop, which has some elementary processing features, and Photoshop, I began trying to squeeze as much as I could out of that image. The final result was of poor quality, but none-the-less, it showed sufficient detail to display what the view was like. It's amazing what one can do with today's graphics programs. In the days of using and developing colour films, and printing colour prints in my own (chemical) darkroom, this feat would have been impossible.

Here is the processed picture: 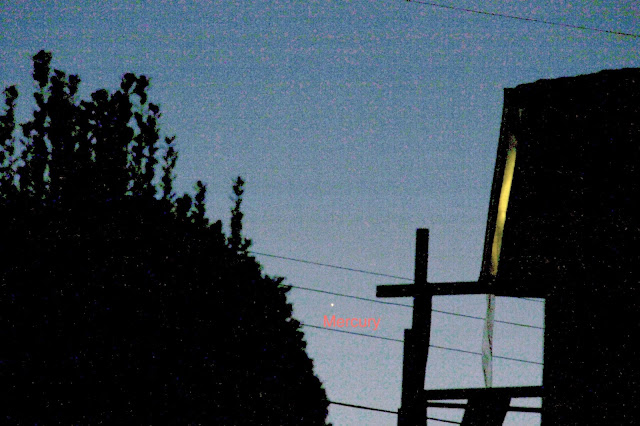 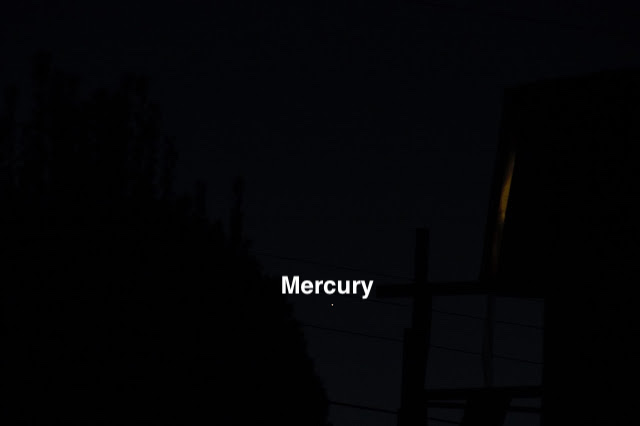 Mercury is the planet closest to the Sun. As a result, it is usually hard to see it because appears only close to the Sun most of the time, and is swamped by a bright sky. Many people have probably not seen the planet Mercury "live" before, even many professional astronomers in the past, and perhaps even now.

The second of Mercury's greatest "Sun separations" (the proper name is elongations) this year, from the Earth's point of view, occurs on March 15, it will be somewhat higher in the sky than shown in the picture above. The weather since the 12th has been cloudy and rainy, so I haven't been able to see Mercury since. This planet's elongations occur several times a year, this year there are seven, three in the evening, and four in the morning. The current evening one leaves it high enough in our local sky to make it the best of this year for us.

Since I saw Mercury this time only by coincidence, I'd say this was a serendipitous occasion.

On March 15, when Mercury was at its greatest elongation, as mentioned above, the sky was clear, and I set out to photograph both Mercury and Venus at dusk. 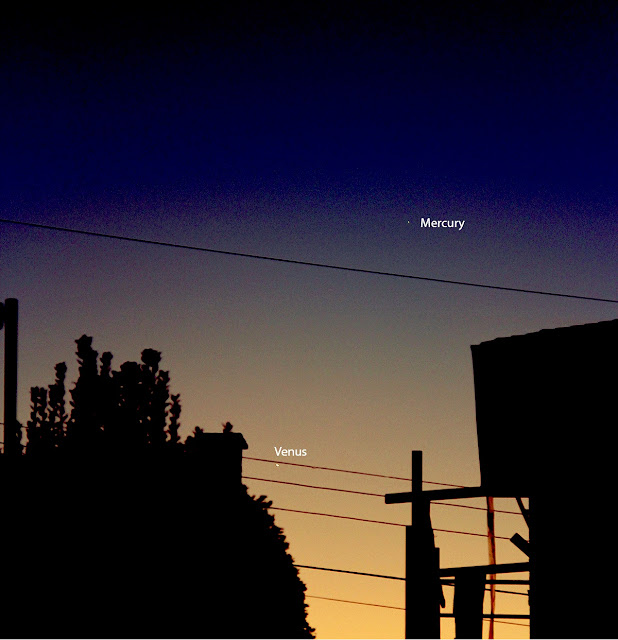