This article begins with a part of my life which is germane to this story. I was born in Berlin about three months before the start of World War II. My father was conscripted into the war effort; military duty was mandatory. As a result, I saw very little of him and I have only sporadic memories of the occasions when he was on furlough. I remember the end of the war more clearly - being subject to the evacuations and bombings tend to sharpens one's mind. My father was taken prisoner of war in Russia at that time and I did not see him for about two years. When he came home in 1947, he was a very sick man and went straight into the hospital. I visited him many times during his stay there. On one of these visits he showed me a book he was reading. It was the German translation of a book about the Moon and the craters on it. The English title is: The Moon, Considered as a Planet, a World, and a Satellite. The authors are James Nasmyth and James Carpenter. The book was published in 1876.

At that time, the origin of lunar craters was still a subject of contention: either by volcanic activity or by meteor impacts (this question was finally resolved in the 1960's and, except for a few volcanic features, impact is the answer). My father showed me a picture of a lunar crater in that book; the picture actually showed a plaster of Paris model, made by the authors to show the lunar craters' volcanic nature. That picture has been in my memory ever since, as well as the title of the book, and its authors. The picture (see below) was the start of my interest in Astronomy; I don't know why it made such an impression on me. The book is actually my last memory of my father - he died a couple of months later. Nowadays, antibiotics would have saved his life, but they were non-existent at that time, especially not in war-torn Berlin.

I subscribe to the Sky and Telescope magazine. The December 2019 issue includes an article by Klaus Brasch, professor at California State University in San Bernadino. The article is entitled "Just Over a Century Ago"; in it, the book about the Moon I described above is mentioned, including the picture of the lunar crater that caught my original attention in 1947. I looked up Nasmyth and Carpenter on the internet, and immediately found a link to lynx-open-ed.org, which showed a dissertation on the two authors and their firm conviction of the volcanic origin of lunar craters, in the German version of their book. The book's title page and the lunar crater picture are shown below. Published in 1876, the original information in the translated text was already about 70 years old by the time I saw it.

Still an active member of the Vancouver centre of the RASC, involved in public astronomy days, using my telescopes, I never get tired of what the sky has to offer. Our current technologies have made astronomy into a science with connections to most other sciences, witness astrophysics, astrobiology, astrochemistry, quantum physics, computer science, geography and geoscience, space travel, etc. These connections often lead to interesting conversations with some of the people attending our star parties.

Professor Brasch's article certainly invoked a lot of nostalgia and makes me recount the many years I've enjoyed this hobby called Astronomy.

The Title Page of the Book 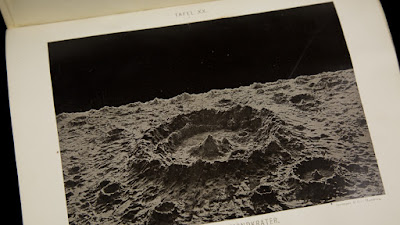 A very interesting and enjoyable post, Karl. The photo of the crater model is fascinating and elicits many thoughts. The same goes for your description of your early life in Berlin. Thanks very much for sharing.

This is a great story, albeit during difficult times for all I'm sure. It's amazing to realize how much influence a book can have on people. I wonder if certain web sites will leave as powerful an image in peoples minds as books seem to do.
I can remember several books that seemed important to me as a child as well.

As far as the lifelong interest in astronomy goes, I have no doubt you have had an effect on many people in a similar way.
I know you played a big part on my personal interest in astronomy. Even though I am not nearly as active as you are, I am sure my friends and family are not as excited as I am when I haul out a telescope at a family gathering to look at the sun, moon, planets or star cluster from our almost dark back yard in Boundary Bay.

Thanks for sharing this passion of yours!
Cheers, Roman