A Very Long Way Out

One of my astronomical activities I personally much enjoy are the public daytime and nighttime astronomy events. Among the objects we observe are the Sun, the Moon, our planetary system, and "deep sky" objects, such as star clusters, gas nebulae, and our own galaxy, as well as far away galaxies. I'm particularly happy when people exclaim a "wow" about what they are seeing (nowadays the word is probably "cool"). Among those objects is the planet Saturn with its rings and moons, Jupiter and its moons, the planet Mars (when it is close to Earth), our Moon with its craters, the planets Venus with its phases and Mercury - difficult to see because it is so close to the Sun. Usually, we can see some of these "spectacular" objects in the sky at the same time.

This brings me to the subject of distances in our own solar system. By definition, the average distance from the Sun to the Earth (150 million kilometers) is called an "Astronomical Unit", AU for short. It takes light more than eight minutes to travel that distance. So we see the Sun as it was over eight minutes ago. Light travels 300,000km in a second - it could travel around the Earth (circumference 40,000km) more than 7 times a second. The average distances from the Sun to Mercury is about 1/3 of an AU, to Venus 2/3AU, Earth 1AU, Mars 1.5AU, Jupiter 5.2AU, Saturn a little less than 10AU, Uranus 19.2AU, Neptune 30AU,  Pluto varies from about 40 to less than 30 AU, it was recently closer than Neptune. We can see all the planets only because they are illuminated by the Sun; we see them in"reflected" sunlight.

The planets beyond Saturn look less spectacular in a telescope; they get as less attention on our public nights. It is possible to gain a better "look" by taking pictures through telescopes. Here is an example of the planet Uranus, I took through a Slooh.com remote control telescope, located on the Canary Islands. 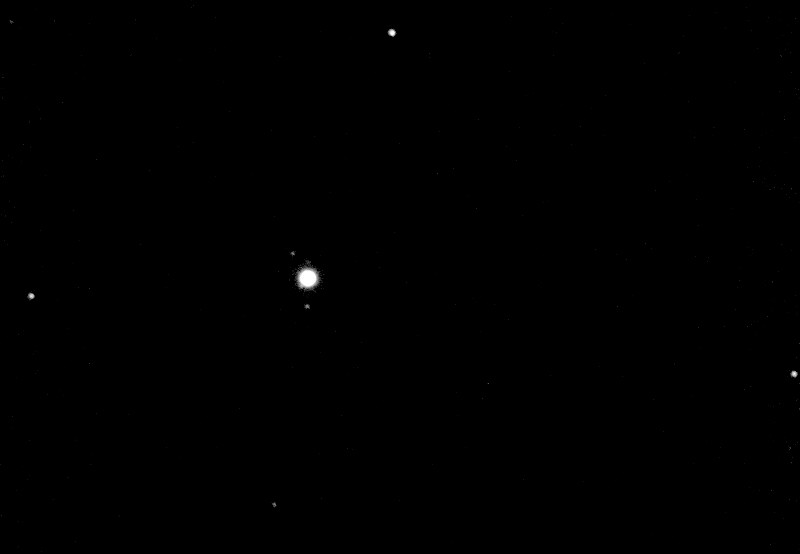 The three faint "stars" you see next to Uranus are some of its moons. They are fairly difficult to see, because the brightness of Uranus. I processed the image in Photoshop to make them more easily visible.

As mentioned above, Uranus is a little less than 20 AU from the Sun. That means that it takes sunlight more than two-and-a-half HOURS to reach Uranus, and another two-and-a-half hours for that reflected sunlight to get back to Earth. Nothing can travel faster than the speed of light - our fastest spacecraft can travel at most about 50,000km per HOUR at present. That's equal to 13.9 km per second, which makes it about 21600 times slower than the speed of light, i.e at a speed of 50,000 km/h it takes 26,100 times 2.5 hours (6.1 years) to reach Uranus, travelling in a straight line. However, all orbits around the sun and the travel paths of space probes are curved, so the time that trip takes is even longer. No wonder that it takes many months or years to get to any of the other planets at speeds we can achieve with present rocket technology.

Now, if you want, consider how long it would take for us to reach even the nearest star, which is about 4.3 light years away, with our currently fastest spacecraft (see appendix).

The universe is huge, and things are A Long Way Out.

Appendix:
To calculate the approximate time it would take to reach Proxima Centauri (the nearest star to us, excepting our Sun, which is also a star as seen from outside the solar system), calculate the number of seconds in a year, then multiply the result by 300,000. That would give you the distance which light travels in one year (that's called a lightyear, and it is a distance, not time). Multiply this number by 4.3. Now you have the total distance, in kilometers, to Proxima Centauri. Devide that number by 50,000. The result is the number of hours it would take to get to Proxima Centauri. Devide that number by 24, for the number of days, devide again by 365.25 (the number of days in a year). Now you would have the number of years it takes with current technology to get to the nearest star.