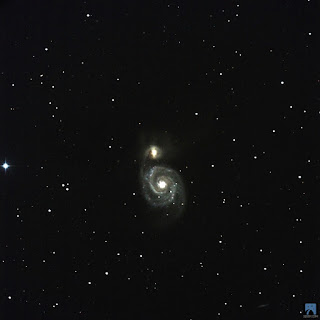 The Whirlpool galaxy
(click on image to enlarge)
I took this image through a remote-controlled slooh.com telescope on the Canary Islands. It can be seen as a small nebulous patch through binoculars.

Charles Messier, an astronomer who was an avid "comet hunter", generated a catalog of astronomical objects which, at the time and using rather smaller telescopes, could be mistaken for comets, because they appeared as faint and nebulous patches, just as comets do when they are far from the sun. 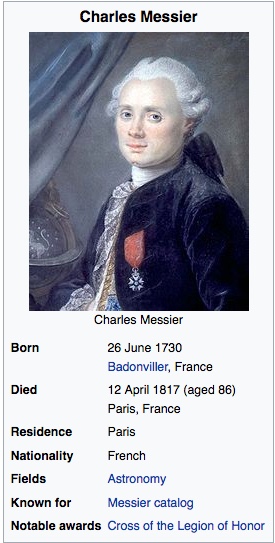 These patches are listed from M1 to M110 in Messier's Catalog, and the Whirlpool galaxy is listed as M51. Messier did not recognize its shape. This spiral galaxy is about 25 million light years distant. The bright patch shown above M51 is what looks like the core of another galaxy (called a Seyfert galaxy), which seems to interact gravitationally with M51. This companion galaxy is listed in the NGC catalog as NGC5195. It was discovered in 1781 by Pierre Mechain and does not appear in Messier's catalog, although some astronomers list the pair as M51A and M51B.

The spiral structure of M51 was discovered in 1845 in Ireland by William Parsons (3rd Earl of Rosse) by means of a then giant 1.8 m reflecting telescope, called the Leviathan of Parsonstown - at the time the largest telescope on Earth. M51 was not recognized as a galaxy, separate from our own galaxy (the Milky Way), until Edwin Hubble (the Hubble Telescope in orbit around Earth is named in his honour) determined the distance of it. This distance puts M51 far outside the Milky Way and makes it a little more than one third as large. That still means that it probably contains about 150 billion stars. Edwin Hubble also determined that the universe is expanding, with far-reaching effects on cosmology and our general understanding of the evolution of the universe.

We know now of billions of galaxies - as numerous as the stars in our Milky Way. The Hubble Space Telescope shows that galaxies appeared very early in the existence of the Universe.